According to latest notification of UPSC, candidates who are participating in NDA 2014 1st attempt exam can download the NDA 2014 Admit Card from UPSC official website, www.upsconline.nic.in. 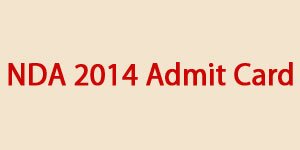 Note: The direct link of admit card will be available here when the UPSC will be released it.

Click here to get the entire details about NDA 2014 exam.