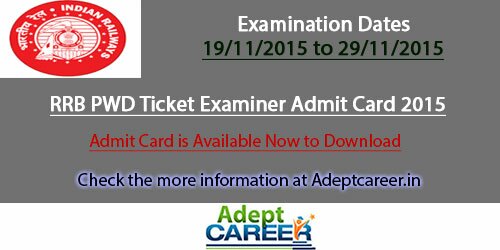 Railway Recruitment Board which is well known as RRB has announced an advertisement (CEN 02/2015) to recruit 651 talented candidates for the posts of Ticket Examiner (TE), Junior Clerks, Commercial Clerks and Trains Clerk (TC). After publication of this recruitment, lots of interested candidates have applied for this recruitment.

Now this is the news for those applied candidates that the RRB PWD (CEN 02/2015) Admit Card 2015 has been released by the official authority and participants can download the admit card from the link provided in this article. We are going to share the admit card link because it has been successfully announced.

The examination authority of Railway Recruitment Control Board will conduct its written examination for the post of Clerk and Ticket Examiner from November 19 to 29, 2015. Authority has declared its Admit Card at its official website, now go and download your Admit Card as soon as you can.

Note: Authority will not send Admit Card personally to any candidate by post. You have to download it from RRCB’s official portal.

Name of the Organization: Railway Recruitment Control Board (RRCB)

Candidates are suggested to read the how to apply, instructions, guidelines and FAQ before writing mail for the official email.

Final Words: Candidates are advised to keep in touch with the official website of RRB to get latest updates regarding Written Examination, Answer Key, Result and further admission process. You can also clear your doubts by asking questions through comments.