National Defence Academy (NDA) and Naval Academy (NA) Entrance Exam is conducted by Union Public Service Commission (UPSC) twice in a year for the selection of unmarried candidates in Indian Army. In 2014, it will be conducted 2 times. First attempt will be conducted on 20th April, 2014 and Second attempt will be on 28th September, 2014. Applicant must be unmarried. The National Defence Academy (NDA) is the joint service academy of the Indian Armed Forces. 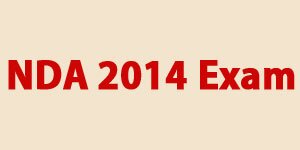 The exam will be of two question papers:

It will be in two parts:

4 marks for every correct answer

The application for NDA 2014 should be done by visiting the UPSC official website and fill in the application form online for the same carefully and correctly after reading all the instructions. After filling and submitting the form candidates must possess a hard copy of the submitted form for further reference. While filling the form candidates are required to pay the fee for the exam online through payment gateway of bank as well as offline via visiting any SBI Branch.

Application fee for General and OBC candidates is Rs.100 whereas there is no fee for Schedule Tribes, Schedule Castes.

NDA 2014 admit card will be available before 20 days from examination at UPSC official website. Candidates are suggested to read more about NDA 2014 Admit Card by clicking here.